All you need to know about Turtle Nesting in Costa Rica! 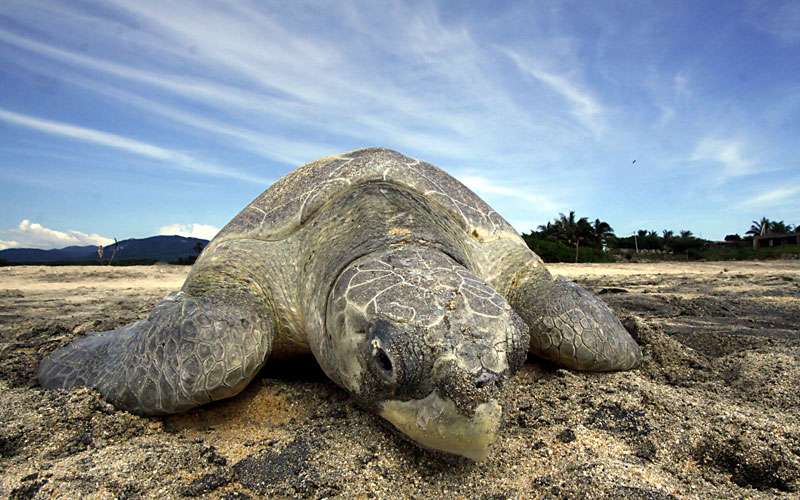 Costa Rica is undoubtedly one of the most beautiful countries in the world. This country is a magical place where you can see different miracles of nature; and one of them is the turtle nesting. Every year the beaches of Costa Rica are chosen as arrival point for thousands of sea turtles traveling millions of miles, in order to lay their eggs here. Some of the turtles that visit the Costa Rican beaches are Hawksbill and Leatherback.

Costa Rican coastal communities expect this event every year. It’s really important to stand up that they do not seek to hunt them or harm them in any way; in fact, the aim is to protect them from those who want to harm them and steal their eggs. people in Tortuguero town (located in the Caribbean region) and Ostional town (located in the Pacific region) organize vigils protection, with the support of biologists.

Costa Rica is privileged since both coasts are visited by different species of sea turtles; among them we can mention, as we said before: the Leatherback, Hawksbill, Loggerhead Turtle, Green Turtle and Olive Ridley.

In Costa Rica the care of the environment is paramount. For this reason they are legal instruments to prevent abuse of both flora and fauna. In the case of nesting turtles there is a specific law relating to the protection, conservation and recovery of sea turtles. Law 8325: Law on Protection, Conservation and Recovery Stocks Sea Turtle, which aims to “(…) take the necessary measures to ensure the purposes of this Law and the commitments made by the country in ratified international instruments on the subject of public interest is scientific research relating to marine turtles and their habitat. (…).” (La Gaceta, 2002) This law is composed of nine articles that seek to profit turtles preventing the harm anyone or anything in any way both they and the eggs that come to spawn.

There are other laws that support and oversee the care of the sea turtle, both living and those who visit the country shore. One of them is Law 7317: Conservation Act Wildlife, which "(...) establishes regulations on wildlife. The wildlife is composed by all the organisms living in natural conditions, temporarily or permanently in the national territory, both the mainland and islands, the territorial sea, internal waters, the exclusive economic zone and territorial waters and do not require the care of the human being to survive. The wild exotic organisms declared by the country of origin, organisms grown or bred and born in captivity from wild specimens, parts, products and derivatives are considered wildlife and regulated by law. Wildlife can only be given individual ownership and trading by the provisions public treaties, international agreements, this law and its regulations. (…).” (La Gaceta, 1992).

In addition to protected areas there are different organizations concerned with the welfare of the turtles that come to nest on Costa Rican shores. One is ADIO (for its acronym in Spanish), Development Association of Ostional. This Association has developed a program of legal and rational use of eggs in the early hours of the Ridley turtle arrivals. This program has the approval and supervision of the Ministry of Environment and Energy (MINAE, for its acronym in Spanish). It is important to remember that Ostional is the only place in the country where you can watch turtles nesting throughout the year with high probability of success.

Another project is the Leatherback Conservation Project and other turtles in the Pacific, specifically in Junquillal Beach (Guanacaste). The ultimate goal is that the community value the turtles when they are more alive than dead, benefiting from their own conservation measures. This project is pioneering work to mitigate and adapt to climate change impacts to sea turtles, nesting sites and the local population.

A turtle nesting observation tour can be included in almost all Costa Rica Vacation Packages; each one has obviously its specific features such as the seasons. During the tours you can see the females arrive at the beach two to three weeks after mating, when eggs are formed. After leaving the water, the female crawls through the sand and choose a place to dig a hole and deposit; it must be a place with no vegetation and distance from the coast to protect the eggs from the high tide the sea drag. The turtles dig a hole the size of their body; then, with their hind flippers, take the sand to make a deep hole and elongated shape that is where the eggs are dropped. In most species, females come to spawn at night and it is believed that some return to the beach where they were born to lay their eggs.

Having started the construction of its nest, the female enters a trance that extends to when finished laying eggs. This takes about 15 minutes. During this time it does not hear or see, so it is very vulnerable. Biologists and scientists also take advantage of this state to take action and collect eggs that are incubated for preservation and study. Eggs have a diameter of 4 to 7 cm and are made from a shell that protects virtually unbreakable breeding. On average, are deposited between 50 and 150 eggs in each nest, this depending on the specie. Even a single female can lay eggs 1000 eggs in one season, making 3-8 nests. Sea turtles can reach nest every 2 to 4 years. Finally, the female covers the eggs with sand compresses to camouflage the nest and confuse predators (which is usually not very effective).

Bright lights and objects like chairs in the sand that obstruct the turtles are threatened for playback. The female returns to the sea without laying eggs if she feels uncomfortable or threatened.

The temperature of the nest determines the sex of the baby turtles; if it is high all will be females, and on the contrary, if it is low, will be males. After 40 to 70 days of incubation, little turtles move about 5cm from the sand to the top of the nest with their flippers. They come to the surface when the temperature has dropped, usually at night, as a way to evade predators and the hot sun. The baby turtles wait for all of their relatives join the group to go to sea.

The attempt of Sergio Pucci – renowned Costa Rican photographer and designer - to capture the turtle nesting as magical as it is, succeeded. Pucci chose, not only the time and place indicated to observe the arrival of Olive Ridley turtles but decided to portray and perpetuate that time from the heights aboard a plane. The result of this great achievement was a series of stunning images that capture the true essence of this miracle of nature, images that also have great scientific value.

This week, the international panel of judges of the competition Wildlife Photographer of the Year selected one of the images captured by Pucci titled as “The Great Arribada”. Sergio won the award in the category of Amphibians and Reptiles. 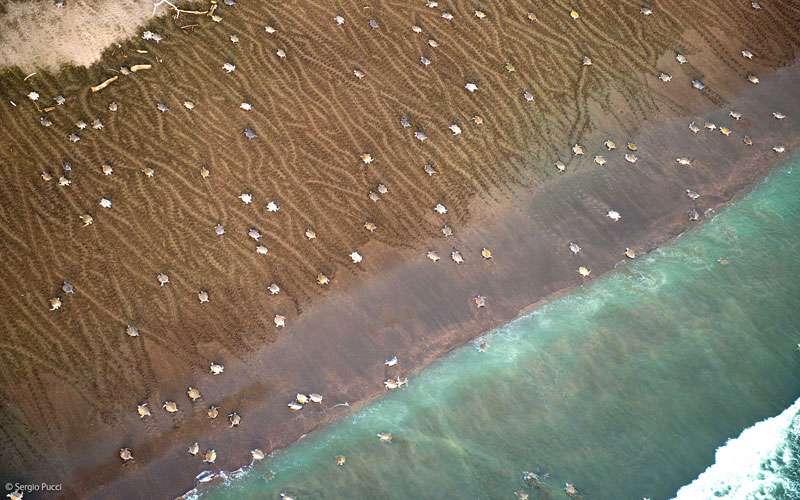