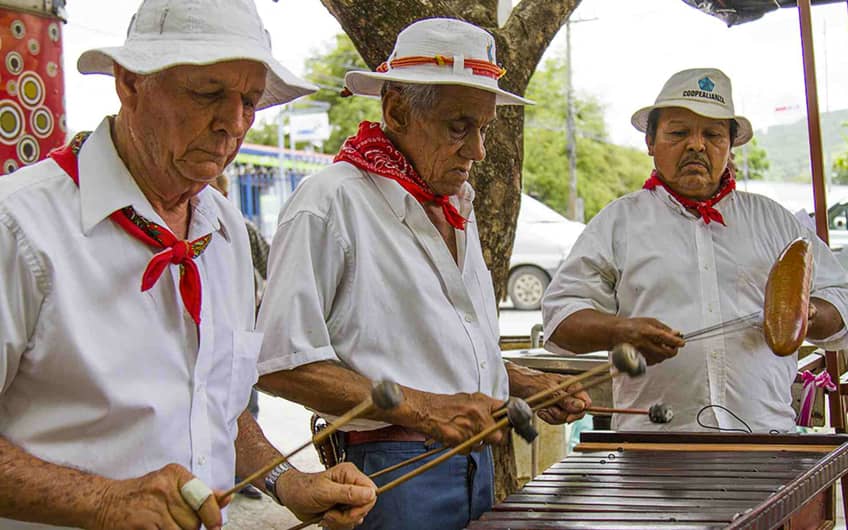 [Typical Marimba Players in Guancaste Celebration at 25th of July]

The ‘Guanacastecos’ have always been well identified with the Costa Rican values and idiosyncrasy, reasons that make them take pride of being a part of the country.  As proof of this voluntary decision, they used to repeat the famous slogan “de la patria por nuestra voluntad”, which actually means "part of this country by our own choice".  A great demonstration of the Costa Rican democracy; they joins the national territory as Costa Ricans by their own choice.

This day is celebrated with a nationwide public holiday and celebratory activities and events in different schools and colleges alongside the national territory, but especially in the province of Guanacaste.  On public holidays, all banks, government offices, post offices and other commercial centers close, thus evidencing the great importance of the Guanacaste Day. 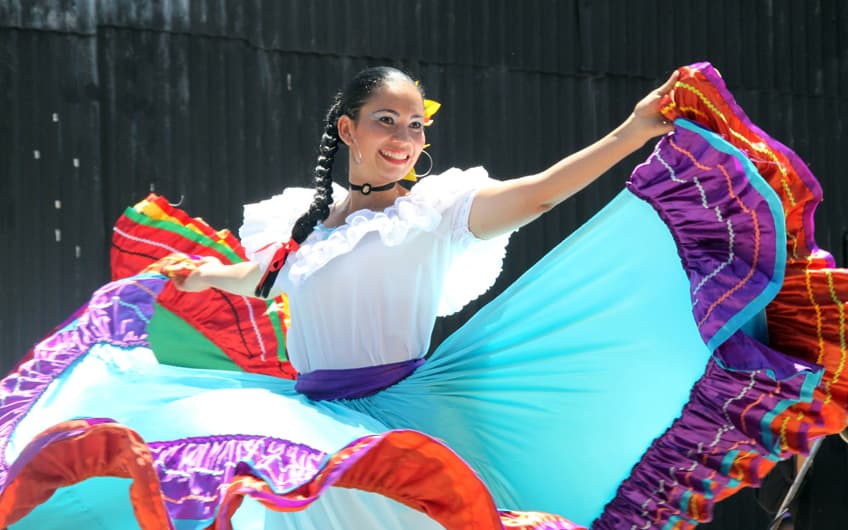 How Costa Rica Celebrates this Day?

The different celebrations of Guanacaste’s annexation is mostly comprised by parades, folk dances accompanied by typical music, cattle shows, Costa Rican typical food tastes and more.  Usually, the parades involve children marching either on the streets or in their schools, while wearing masks and dressing up as a variety of traditional characters or as cattle farmers.

The “bullfights” are also typical of the Guanacaste Day celebration.  However, this kind of activities in Costa Rica are very different than the ones held in Mexico or Spain.  The “tico” style of bullfighting does not involve killing or hurting the animal; it’s all about young unarmed men teasing a bull or cow around a ring for a few minutes. Usually, the guys are dressed in a funny way and they try to win prizes or entertain the audience.

In Guanacaste the celebrations are more representative than the ones held in the Central Valley. The streets are usually filled out with handicrafts and Costa Rican typical food, like tamales and “gallos” -grilled meat with tortillas and salad-.  Concerts, fireworks at night and some folk dances are also part of the celebration.

If you want to know which are the most popular typical dances that occur during the celebration you must look for a representation of the popular Caballito Nicoyano (Guanacastecan little horse, literally), Torito (little bull) and the Punto Guanacasteco (the national step dance).  Of course, involved in the Annexation of Guanacaste celebration’s is the music of Costa Rica’s national instrument, the marimba. Traditional groups play this instrument and, in some cases, the dancers use the live music to perform. 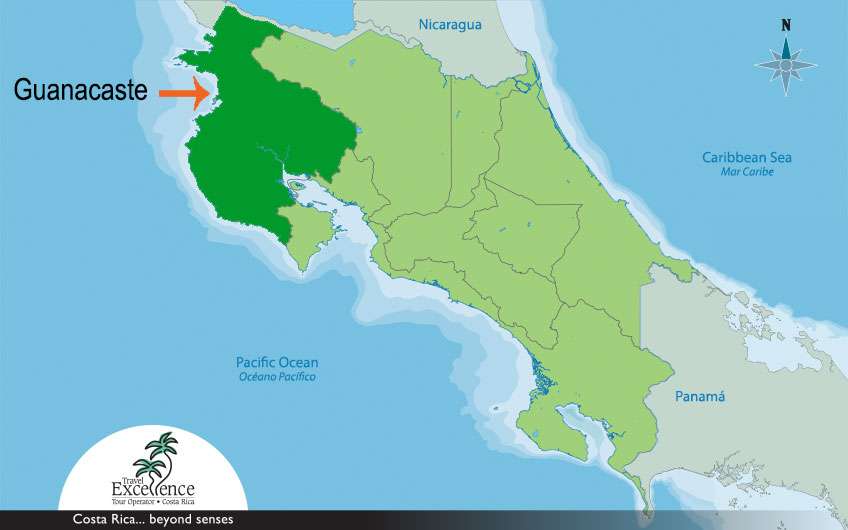 But, which part of Guanacaste was annexed?

Bagaces and Las Cañas (today only Cañas) and the regions of Tilaran, Las Juntas and Abangares, have always been Costa Rican territories.  Prior to 1824, Costa Rica’s border to the northwest was the Tempisque River, and the places mentioned before there were never annexed. The territories annexed were the ones sharing closely borders with Nicaragua. 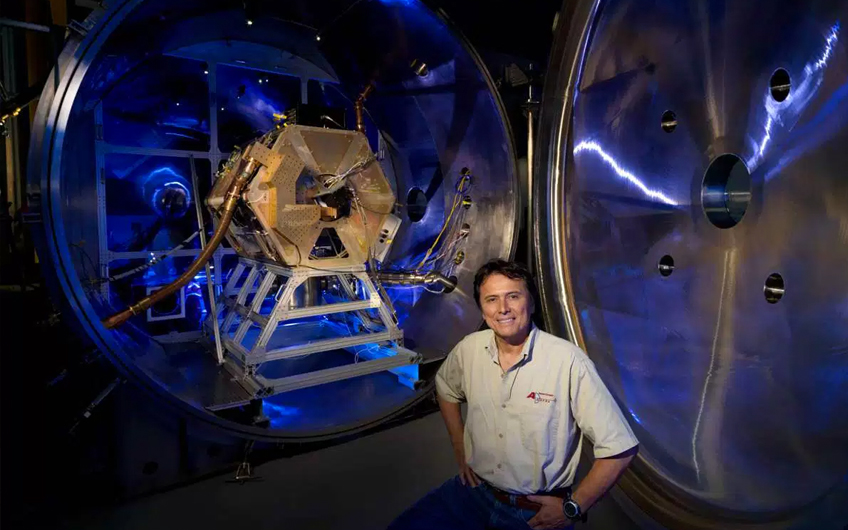 Nowadays, 192 years later, Guanacaste represents a truly important part of Costa Rica. The development of the area shows an important increasing that contributes strongly with the economy of the country and its international reputation.

Proof of this important expansion are the millionaire investments made in the area; as well as the new technological and architectural projects developed all over different Guanacastecan regions.

Just to mention some of them, we must think about the recently inaugurated road between Cañas and Liberia. This highway is considered as a road with the “first world” quality.

The extension of this main road allows a fluid traffic to the area, while giving the opportunity to speed up the transportation of materials and the mobilization from one place to another.

This construction was made with high quality materials, to ensure the durability of the road.

The official inauguration of the North Inter American Highway was held last Wednesday, July 20th and despite the official act, it is expected that the extension road jobs continue for several kilometers. A great demonstration of the importance of this area for the country.

Other important and remarkable proof of the region’s relevance is the future construction of a Data Center in Tilaran, an important project that pretends to give more than 300 jobs to local people. The ambitious project consists in the creation of a modern and innovative last generation center which will process data from several important regions of Latin America and the World.

The initial investment for the Continum Datacenter, as it will be called, was of approximately $2.5 million and already has to strong and very potential clients: Visa and Mastercad. It is expected that the center will process data from all over the world, and one of the most remarkable aspects about it is that it will work using energy from natural resources, such as the wind energy.

Continuing with this technological advances, it is important to mention the Frankling Chang’s center of science and technology: the Ad Astra Rocket Company (AARC). The company is dedicated to investigations for the development of advanced plasma rocket propulsion.

The project counts with ultimate technology and has a strong sense of social responsibility, trying to create conscience of the World’s current situation and how to prevent the extra damage in the environment.

The Ad Astra strive to motivate the future generations to have a stronger and realer societal consciousness of the problems that are affecting us and the world every day. One of the ways in which the social contribution is directed is by creating awareness through various activities divided in four different categories: Earth, Space, Community, and Education. 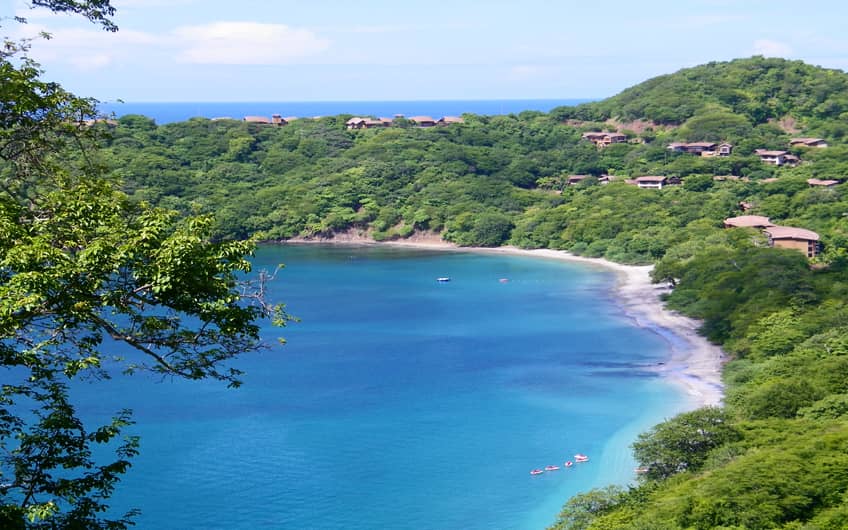 [View of the Península del Papagayo in Guanacaste]

And, last but not least…

Guanacaste is well-known for its pristine and magical beaches. This international fame has contributed to arouse the interest of important real estate projects in the area: a lot of luxury hotels, shopping and business centers, as well as condos and mansions are being widely constructed in different parts of Guanacaste.

The closeness to the recently constructed Daniel Oduber International Airport allows the visit to a bunch of tourists wondering to spend some unforgettable vacations in Costa Rica. This is a strong point cause it ease a lot the transportation, reducing the travelling time and allowing tourists the enjoyment and profit of its stay in the country.

Guanacaste has been visited by some famous people too; part of The Walking Dead cast, Mel Gibson (he also owned an exclusive home here), pop singer Pink got married at Four Seasons in the Panínsula de Papagayo, Charlie Sheen and Brooke Mueller got their Honeymoon in Costa Rica are just some examples of artists that has been seduced by the paradisiac locations of this Costa Rican province.

Now, you may know that planning a visit to Guanacaste will worth the effort. If you are looking for some different and comfortable vacations, nested among incredible nature and views then you must come here and lodging in our best resorts. Planning your trip to Costa Rica hasn’t to be difficult. We can assist you in organizing or creating your itinerary.

Guanacaste awaits for you, a little piece of heaven in Earth!