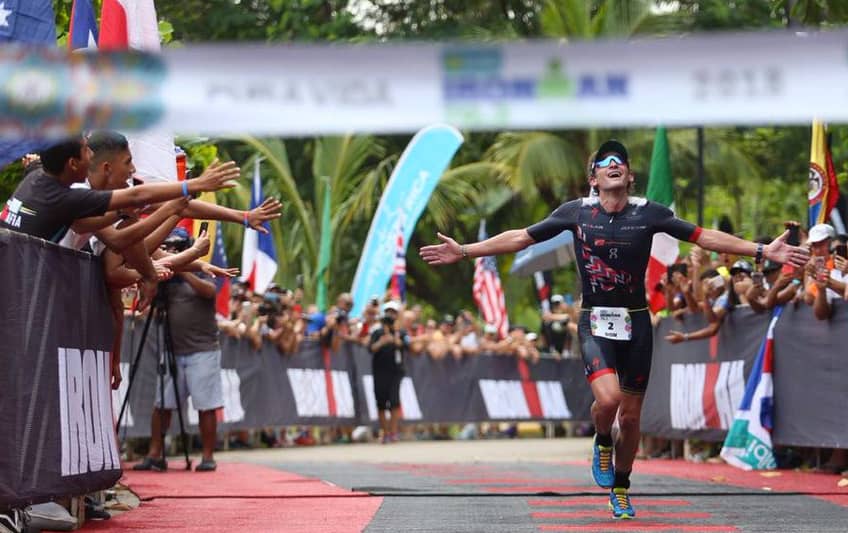 The second edition of the even more prestigious race in Costa Rica was held this Sunday June 24th in Playa del Coco in Guanacaste, one of the most beautiful Costa Rica beaches and the same race venue of the last year.

Last year, competitors agreed that the pristine waters of this beach favored a good swimming circuit, and it was also voted as one of the best swimming circuits in Ironman 70.3 competitions. The country even won the Ironman 70.3 Athletes Choice Awards in the category of Best Overall Swim 2017.

Besides, the tropical Costa Rica weather added a difficulty to the event as it was very rainy on Saturday morning and the early morning of Sunday, so competitors had to race in strongly humid conditions and under a heavy sun which added extra difficulty to the race course. But, the kindness and the support of the locals, just like last year, encouraged the competitors to continue regardless the harsh conditions.

This year, the event had an even more special participation: the world-known British triathlete Tim Don ‘the man with the halo’ selected the Ironman 70.3 Costa Rica for his return after having suffered a serious accident eight months ago.

Timothy Phillip, known as Tim Don, became a World Champion in 2006 and won the London Triathlon in 2007. He set a new Ironman World Record at the Ironman South American Championship in Florianopolis, Brazil on May 2017.

Don, a professional triathlete, was hit by a car just two days before Ironman World Championship in Hawaii in October 2017, suffering a hangman’s fracture to his neck. Tim spent three months in recovery with the use of a Halo Brace.

“The halo is a terrible experience, but it’s the best option if you want a complete recovery without long term limitations. Basically, it consists in four titanium pins that directly attach to the skull. It is very painful, but it works”, explained Don’s physician in the documentary “The Man with The Halo”, produced by Andrew Hinton and actually released on May 28th.

The fact that Don selected the country for his return means so much to the country as the eyes of the world would be placed on the destination and the competition of Don. This way, Costa Rica consolidates -little by little- as a favorite and well-known destination to compete in a 70.3.

“Miami Tri Events, organizer of the kölbi IRONMAN 70.3 Essential Costa Rica is proud and grateful that triathlete Tim Don has chosen our event to make history. We share those values of overcoming challenges, effort and sacrifice, that he represents. One of the main goals of the kölbi IRONMAN 70.3 Essential Costa Rica is to motivate and instill these values in this great family of triathletes. The importance and key to success to achieve the dreams are within you, your perseverance and persistence. Tim is a live example that everything is possible”, stated the Ironman press release.

Now, just 8 months after his accident, the British athlete got the victory with a total competition time of 03:49:59. The Australian Ryan Fisher was second a minute away, while the third place went to the Brazilian Santiago Ascenco.

This year, the race counted with the presence of a great number of athletes representing many diverse countries. It was possible to see different trisuits carrying proudly the flags of Mexico, Colombia, Australia, United States, Brasil, United Kingdom, among others.

Costa Rica sports travel is increasing as athletes from all over the world come to participate in events such as this successful competition and they usually come with a support crew that is commonly the family and friends and in the case of professional athletes, their team. This is positive for the country as it increases the possibility of a second visit for some vacations in Costa Rica or a second visit to compete too.

In this case, most of the athletes arrived in the Daniel Oduber International Airport located in Liberia Costa Rica, as it is the nearest port to the race venue and the most prestigious hotels of the area. But, some of the competitors expressed their willing of another visit to the country in order to visit more iconic places such as the Arenal Volcano in the Northern region, the Manuel Antonio National Park in the Central Pacific, the Tortuguero canals in the Caribbean side and, of course, the capital city of San Jose Costa Rica.

The scenario of the competition

Guanacaste province comprises, approximately, more than 400 miles of coastline. In a Costa Rica map the area of this province is considered from the border of Nicaragua to the Nicoya Peninsula. Specifically, the border that finishes in the Bongo River estuary. The Guanacastecan region features a considerable number of protected areas in which we can name water resources, mountains, lands, and coastal ecosystems thanks to the lush landscapes and the changeable weather conditions.

As competitors could notice, the abundant microclimates and the different characteristics in the vegetation lead to many habitats and animal species living in the area. This is why most of the visitors and foreigners come to Costa Rica in order to experience the authentic wildlife in a new way; in this case, while competing in paradise.

Athletes competed in Playas del Coco, which is one of the most famous and traditional Costa Rica beaches, here the soft waves and the grey sands make it a good spot for recreational and sporting activities, and the abundant marine life allows great snorkeling and diving tours, making it more attractive.

The 2019 edition of the Kölbi Ironman 70.3 Costa Rica is already confirmed so it is expected that through the year the competition wins more followers and athletes interested in participating in the third edition. This way, the destination will become an even more known event in all the globe and the great organization of the race also allows it to be considered as one of the top Ironman 70.3 competitions.

And we believe that we are on the right track!

Travel Excellence was present in the event too

Our company followed so close the course of the competition there in Coco beach, and we can affirm that this event was managed in a very sustainable way, according with the values that distinguish the Costa Rican efforts for sustainability. This way, we can say that athletes and their families traveling to Costa Rica for the Ironman race will be also supporting the conservation of the environment and practicing the ecotourism as well. This is another point in favor that makes the destination attractive!

And, as if that were not enough, one of our colleagues, Mr. Guido Garita, participated for the second time in the competition. So, we can say that also our work team was also present in a sort of way, in an event as important for the country as it was this race. Our congratulations to Guido!

We are already looking forward to next year’s event. Hopefully next year the country will count even more with the visit of high caliber and international renowned athletes who come to enjoy this wonderful piece of land while testing their inner force.

Would you encourage yourself to race in Costa Rica? Leave us your comments and contact us if you want to know more about our Costa Rica vacation packages or our tour and hotels options.