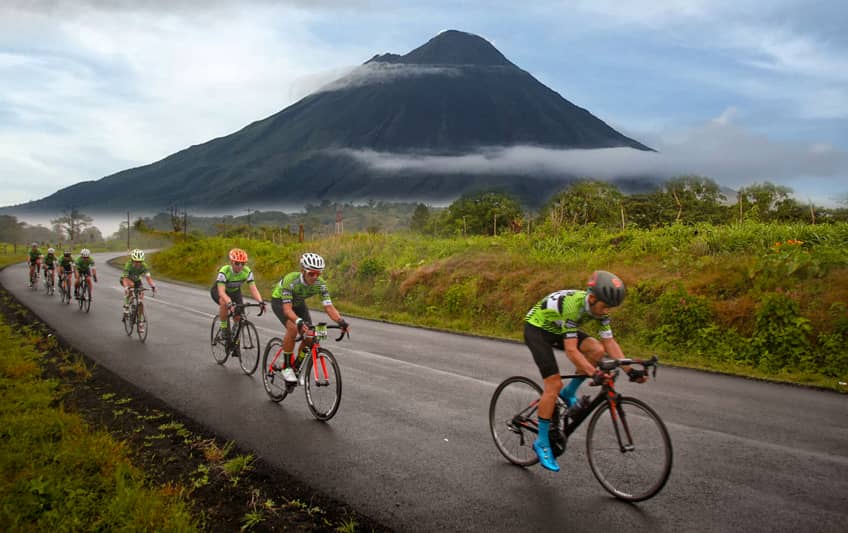 More than 600 cyclists will have an appointment on April 22nd in La Fortuna de San Carlos, in the northern region of Costa Rica, where the race called GRAN FONDO NEW YORK COSTA RICA (GFNY) will take place for the first time in our country and in Central America.

With this first edition, Costa Rica joins the list of more than 20 countries that have the privilege of having this competition, which was born 6 years ago in New York. Currently, the event has a participation of more than 30,000 cyclists in all its venues, which makes it one of the largest series of cycling marathons in the world.

GFNY Costa Rica is a race for amateur cyclists of high level and under the slogan "Be a pro for a day" has as main objective to make participants feel like elite competitors for a day.

"This race is a challenge for athletes who want to meet new goals, prepare for other competitions and improve their physical condition or their times, or simply be part of one of the most renowned cycling events in the world", said Arturo Echandi, member of the organizing group.

Mr. Echandi added that one of the main attractions of the competition is that the winners qualify for the preferential pens of the original race in New York, which will be held this year on May 20th. This is of great benefit for the winners, because having a participation of thousands of cyclists there may be differences of up to 15 minutes in the departure between the first and the last participant.

The competition route in Costa Rica will take place between La Fortuna de San Carlos and Tilarán in the province of Guanacaste, bordering the Arenal Lake, and will have two modalities: a short route of 90 kilometers and a long one of 150 kilometers.

The participants will compete in eight categories in feminine and masculine, and the three first places of each one will be rewarded. In addition, the first female place and the first male place will win a high-profile Cannondale bike.

For this great event is already confirmed the participation of important cyclists and figures from our country as Federico Ramírez, José Adrián Bonilla, Adrián Robert, Emilio Valverde, Christian Massey and the current female champion of elite route cycling Natalia Navarro, who also participated along with her husband in the New York race of 2017 and was the winner of the couples’ category.

Registration has a cost of $ 195 can be made entering. The amount includes the official cycling jersey of the event, premium assistance during the tour in which there will be 5 stations with food and drinks, timing, medal, mechanical assistance, insurance and identification.

A showcase for the world

GFNY Costa Rica 2018 has the country brand certification "Essential Costa Rica" and aims to become a showcase for both cycling in Costa Rica and national and international tourism. That is why the choice of San Carlos was due not only to requirements of the franchise in terms of promotions, the amazing and attractive landscapes and relative proximity to the Costa Rica airports but also that the area is of great tourist attraction perfect for participants and their families or companions can enjoy a few days away from the city.

To date, a third of the registered competitors are foreigners and it is expected that with this event an important number of tourists and cycling enthusiasts will arrive to the area. For this, the organization made an alliance with the Association of Integral Development of La Fortuna (ADIFORT), in order to hold a fair in its facilities on April 20th and 21st where the registration packages will be delivered and where the official sponsors of the event and other companies will have stands and activities; all with the objective that both cyclists and their companions visit the area and the event contributes to local tourism.

If you want to know more, or if you are a participant and want to spend some more days vacationing in Costa Rica, then write us a message a we will be more than glad to give you further information and assistance.