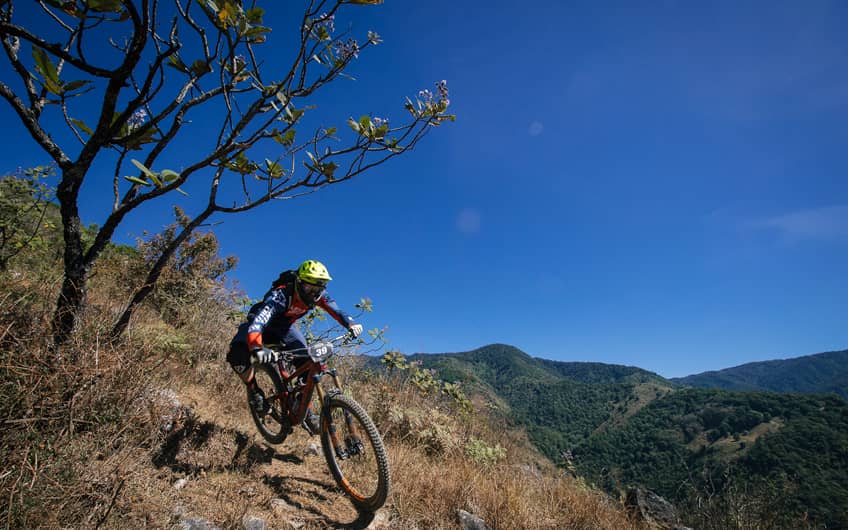 This Thursday, September 28th, the mountain biking event everyone was talking about in Costa Rica started. Trans Costa Rica was a demanding race in terms of mileage, but it brought cyclists the best experience and the country enjoyed a great exhibition worldwide, that’s why the organizers hoped to become the best competitive event in the national MTB.

The competition had four stages, between September 28th and October 1st, three of them were long distances and the other one was a time trial that had never been seen before in the country, although it is an internationally recognized test.

The idea of Trans Costa Rica was brought to the country by cyclist Dax Jaikel, who after competing for 10 years in the Transalp, realized that such an event was possible here in Costa Rica. In order to get the idea done, the 7C Sport Cycling family gathered a different staff, where all are cyclists, together they had the necessary tools to put together this project, which become a reality and its first edition was expected by all, whether participants or not.

The Trans Costa Rica was a race that consisted in different events: the 4-day race -or full race version-  where the athletes competed in the 4 stages, the 2-day race where they competed on September 30th and October 1st, and the 'final day' race in which they, all together, participated in the arrival to Palmares, on the last day.
During this race, 196.5 kilometers were covered in total. The stages crossed beautiful landscapes, complicated terrain and changing climates, all the essences that a country like Costa Rica can show for both, locals and foreigners.

In the first stage, the race left the Recreation Center Los Manantiales, in Carrillos of Alajuela and finished at the El Corso Lechería -a local estate- in Vara Blanca. Here, in Corso, the participants were happily greeted and also there were a lot of fun activities for all ages, in order to amuse the participants’ families while they were waiting their athletes. Costa Rican typical foods and traditional games were part of this festive weekend.

The second stage was the time trial and left the school of Birrí in Barva de Heredia and ended at the gate of the Poas Volcano. Here, the cyclists enjoyed a start point never seen before in the country with a professional ramp for the athlete to wait until the start signal. As it was located right in front the school, the participants received a lot of support and applauses from the students and other kids who were very excited with the event.

The third stage began in the Avimil store in Escazú and concluded in the center of Turrúcares in Alajuela. Lush vegetation accompanied the participants, offering them unparalleled views. Finally, the fourth and last stage, left Turrúcares and reached the Palmares arena, where cyclists were received with activities, music, raffles and the final awards.

In this first edition, there was an enrollment of 221 cyclists, of which 16 were foreigners, some of them very serious elite athletes, and also the feminine participation was considerable, 16 women were also involved getting amazing results and showing fierce determination and effort.

The foreigners present in this gala, were great exponents of world cycling. Among them the event had the participation of 3 winners of the prestigious Titan Desert competition such as: Josep Betalú of Spain, Luis Leao Pinto of Portugal, Ondrej Fojtik of Czech Republic, the Italian Massimo Debertolis (who comes from winning Transalp along with Dax Jaikel).

In addition, this important cycling event was attended and honored with the presence of the National Champions of some countries like: Colombia, Austria, Panama, and some squadrons, like the Wilier Force from Italy.

The national athletes were not far behind, Costa Rica had the best representation with teams like: Specialized, Focus, Orosi Group (Grupo Orosí), CBZ Asfaltos 7C Sports, and Scott Tele Uno were part of the squads that were disputing this competition.

In addition to the economic prize, the winners of all categories took a trophy made by Costa Rican artisans: cut, armed and hand painted, they were completely unique; this way they took with them a piece of the Costa Rican culture for the world!

In summary, this was a race for all, riders and fans, who enjoyed competitive cycling of the best level. All the stages were carried out in the metropolitan area, in order to make possible that the people could accompany the cyclists on the routes and also enjoy excellent landscapes.

If you are not a cyclist but enjoy mountain bike rides, let us tell you that here in Costa Rica we have a lot of places to enjoy great biking tours at the same time you enjoy your wonderful vacations in Costa Rica. It doesn’t matter which places you are planning to include in your vacations package, we surely can fit this activity into your itinerary.

Some of the best places to enjoy mountain bike tours can be found in La Fortuna Arenal, near the impressive Arenal Volcano lake in the Northern region of the country, and Guanacaste with its amazing landscapes, beaches and dry vegetation in places such Las Catalinas -here they develop different cycling and triathlon races during the year thanks to the vegetation and ground conditions-.

Turrialba is another important region where landscapes with great views, cool climate and good mountains to climb can be found too. If you prefer cold weather conditions then you could try the mountain bike tour offered in Hacienda AltaGracia, spend some nights there and then experience the beauty of the Pérez Zeledón mountains.

Just to mention some places… you will need to come and find your own preferred spots for practice this beautiful sport in harmony with nature and, of course, the Pura Vida vibe!

Trans Costa Rica closed its first edition in the best way possible and promises to return next year with more surprises to continue enjoying the mountain bike cycling and the natural wonders of Costa Rica.

Leave your comments below, we will love to hear about you!