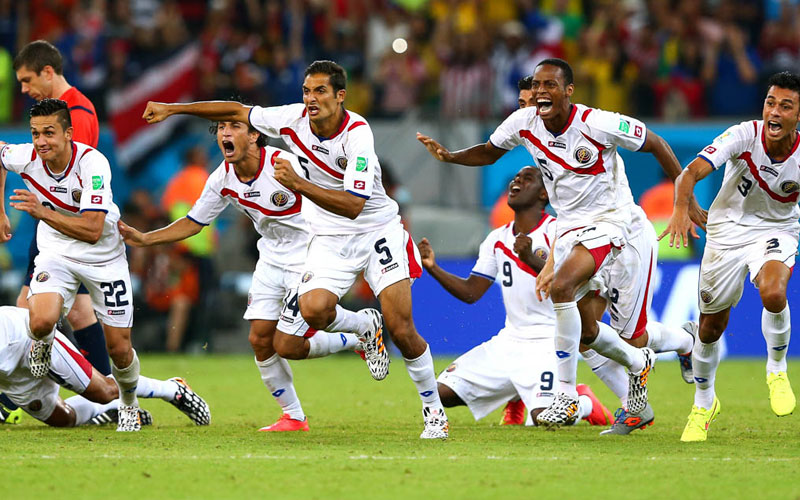 Having left former champions Uruguay, Italy and England behind to sensationally win their group — the “group of death” — the Costa Ricans played yesterday in Recife against Greece for a place in World Cup quarters.

It had been 24 years since Costa Rica’s first time in the Round of 16. That was in Italy '90, their first trip to the World Cup, where they finished second in their group but then got defeated 4-1 by Czechoslovakia in their only knockout match.

But this time, Costa Rica was writing a different story. A story full of historic victories. First, beating the 2010 semifinalist and four times World Champion Uruguay 3-1 in the first match in Fortaleza. Against all odds, the opener game of “La Sele” in Brazil 2014 left the whole world breathless. Edinson Cavani had given the South Americans the lead from the penalty spot, but Joel Campbell and Oscar Duarte struck with minutes of one another before Marco Ureña rounded off an unexpected win.

In the second game of the group phase, Bryan Ruiz scored the only goal of the match. Costa Rica shocked Italy with a 1-0 win that also knocked out England – its next rival - out of the 2014 World Cup.For the first time, this Central American country won their first two games at a World Cup, and sealed their spot in the last 16, with still a pending game.

And to “finish” this historical participation, they tied 0-0 with England and secured the point they needed to top the group.

Costa Rica's expectations have skyrocketed, not just because of the results but the way they earned them. Ignoring negative comments like the one made by Mourinho when he said that it would be difficult for Costa Rica play another good game like the one made against Uruguay.

“We will keep working and keep surprising the world.”– said Paulo Wanchope, Costa Rica’s coach assistant, after the match against Uruguay.

Neither, Costa Rica or Greece, had been before in the World Cup quarterfinals; but one of them is now: Costa Rica.

The “Ticos” took an early second-half lead through captain Bryan Ruiz but, after being reduced to 10 men when Oscar Duarte was sent off for his second booking in the 66th minute, conceded an injury-time equalizer to Sokratis Papastathopoulos that sent the match into extra time and lately to shoot outs.

It was Michael Umaña who scored the winning penalty for Costa Rica, their fifth, after Theofanis Gekas’s strike had been repelled by Navas’s strong hand.

“To the entire people in Costa Rica, those at home and out on the streets, this is for you,” Costa Rica coach Jorge Luis Pinto said.

Now, Costa Rica will play against the Netherlands on July 5 in Salvador.