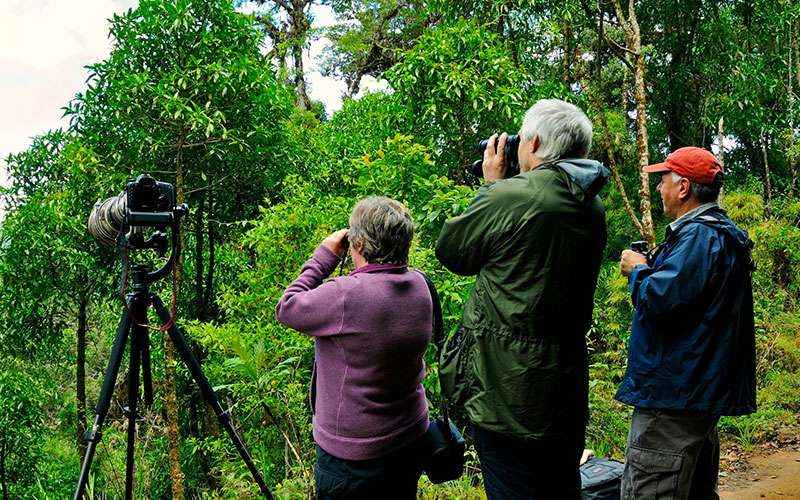 Highlighting more than 900 species and unique natural scenarios was part of the Bird Challenge, that positioned the country as a destination for bird watchers from the United States, Sweden, Canada and the Netherlands.

The country has more bird species than the United States and Canada combined. Precisely because of these particular characteristics, for example, in the framework of the development of the “Bird Route” developed by the Costa Rican Institute of Tourism, our country was chosen to host the Bird Challenge 2018.

The activity reinforced the ICT Bird Route, which seeks to reinforce the country's proposal for this niche, and was developed from the 4th to the 12th of October at the main observation points of birds of the country, with the presence of international guests, all of them experts in sighting from the United States, Sweden, Canada and Holland.

According to Rafael Soto, coordinator of the "Ruta de Aves" program of the ICT, “the objective of this event, beyond a count of species and to put high-level influencers on the subject, was precisely to position Costa Rica on the world map as an avitourism destination during the period during the August-November period of each season during the autumn migration”.

This tour also coincided with the migration of bird raptors that currently occurs in the Costa Rican Caribbean side. To achieve this purpose, a familiarization trip was made that included an intense observation tour and a travel from the Carara National Park to Bahia Ballena National Park, Sarapiquí, reaching the Caribbean zone -where the observation tower of the Kekoldi indigenous reserve was visited-, then the group headed to Nicoya and then established a return to Coronado in San Jose, as the final point of sighting.

"Within the familiarization trip, the Bird Challenge was included, consisting of the division of observation groups from various countries in the world in a synchronized manner. Taking advantage of the presence of experts, international press specialized in bird watching and travel agents that cover this segment, a tour was made starting in the Middle Pacific, then we visited the moor in Cerro de la Muerte where we saw some endemic species and the magical quetzal. We continued in Sarapiquí in another type of forest, until late at night looking for some owls. This effort positions us and puts us on the world map of bird watchers," Soto said.

As part of the collateral positive results of the Bird Challenge and its parallel activities, the inclusion of the count data in the official records of the Cornelle University in the United States was achieved. In addition, updates made by international experts will be placed on the most important page of bird watching in the world: www.ibird.com.

"We are always among the top ten countries in bird counting and this is a great effort of the birders of our country" said Rafael Soto, who accompanied the international guests during this extensive tour.

Do you know what the National Bird Route is?

The bird circuit of Costa Rica is focused on the segment of bird watchers (national and foreign, specialists and beginners) that integrates practically all the national territory with points and localities of the country specially selected to offer the tourist a high value-added experience; not only because of the high diversity of bird species, but because of the complements of culture, rurality and local communities that are being integrated in these Costa Rica tours.

The design of this route contemplates the birds as a central resource, and the participation of towns and communities near the sightings points as well as the entire necessary range of natural, cultural and human resources, and services offered to tourists during their vacations in Costa Rica.

The Costa Rican Tourism Institute with the support of business chambers, specialized associations and other relevant actors, promotes a medium and long-term project whose main objective is the strengthening of a network of bird watching locations in rural communities of Costa Rica.

The main objective is supporting the private sector in the development of products of high quality and added value capable of generating unique experiences and productive linkages around the activity of bird watching.

The Bird Route has been strengthened

Since its launch more than two years ago, the "Bird Route" program of the ICT has been strengthened with a series of trainings for tourist entrepreneurs located in the observation nodes in which the country is divided.

In addition, the promotion of Costa Rica as a bird-watching destination has increased with specific marketing actions such as the support of the Bird Challenge, conducting familiarization trips with agents, as well as the invitation to journalists specialized in bird watching, bloggers and influencers.

With the development of this program Costa Rica expands its tourist offer to a promising market niche, demonstrating that it has the logistical, professional, technical knowledge and facilities for the implementation of routes, circuits and personalized trips concentrated in the months of the low season of our country, which is the best season to observe birds in many of the Costa Rica top destinations.

The observation of birds represents one of the main activities to which the country bets to attack the seasonality of the visit of tourists. According to information collected by the ICT in the United States, there are more than 50 million bird watchers and in Europe more than 10 million birds, which constitutes a wide potential of the main emitting markets.

Soto, coordinator of the ICT Bird Route program, concluded that little by little the objectives of the program are being fulfilled by improving the innovation processes of tourism services at the local level, as well as linking bird watching as an incentive for the conservation of the environment and the generation of economic and social opportunities, but above all contribute to the positioning of Costa Rica as one of the best destinations in the world for bird tourism.

John Fondore, expert in birds and representative of the e-bird website for Central America, expressed that this event was an excellent experience for observing over short distances, for its habitats and its wide bird communities and has the advantage that in one day you can see many species.

Also, Sergio Arias from Costa Rica Birding concluded that "we are placing ourselves in the world as the small giant of bird tourism, because we are a small country with a wide diversity of birds with 920 species".

As it can be seen, birdwatching options are almost endless and are growing each day. If you want to know more about this topic, do not hesitate to contact us, we will be more than glad to assist you and give you more information.

Besides, if you are a bird lover, then you can arrange your next vacations in Costa Rica with a great birdwatching vacation package in it!