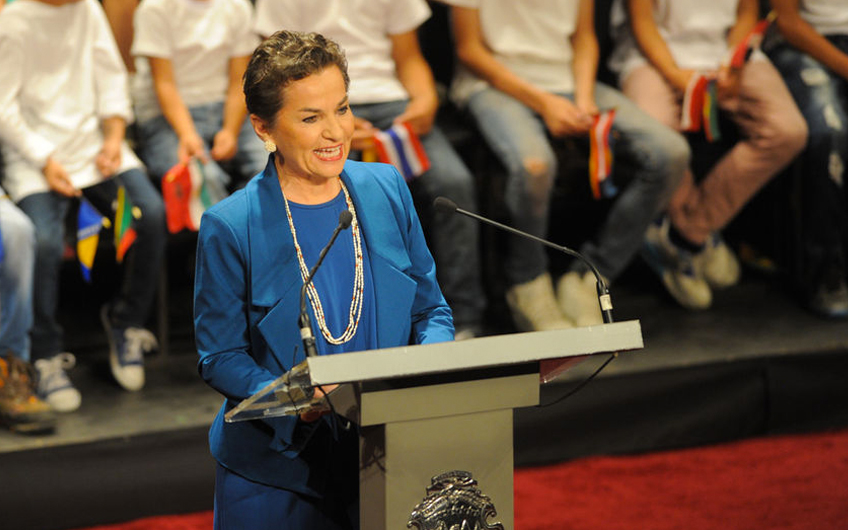 President Luis Guillermo Solis announced on July 7th that the government of Costa Rica has nominated Mrs. Christiana Figueres for the post of General Secretary of the United Nations.

During the announcement, which took place at the National Theatre of Costa Rica, President Solis said: “The United Nations and the world need a General Secretary with the ability to build bridges, capable to ask and listen, prepared to solve disputes, build agreements and anticipate problems. Christiana Figueres has proven to be that person”. He also add, “She has the skills to help the UN to face its responsibility to build peace, resilience and opportunity in a time of change”.

As General Secretary of one of the most important agencies of the United Nations, the U.N. Framework Convention on Climate Change (UNFCCC), Figueres was the person responsible for leading and guiding governments to reach the historic Paris Agreement on Climate Change, an achievement against all odds.

This agreement at the Paris climate talks last year was the crowning achievement of her nearly six productive years as executive secretary of the UNFCCC, and this is the most ambitious global resolution against climate change in the human history. The work done by her shows the world that it is possible to succeed in avoiding catastrophic climate change and become more unified in the process.

Christiana was appointed as the new Executive Secretary of the UNFCCC by the United Nations General Secretary Ban Ki-moon in 2010, and she was selected for a second three year term in July 2013.

Climate change and the efforts to reduce its impact is a topic that passionate her, since she started to observe that many species were disappearing. She has her personal strong reasons to fight for it; “I saw a species literally disappear in my lifetime,” she said. “We don’t become mothers to hand over something that is diminishing to our children.”

She has been involved in climate change negotiations since 1995. Ms. Figueres was initially a member of the Costa Rican negotiating team, and was also one member of the Executive Board of the Clean Development Mechanism and Vice President of the Bureau of the Conference of the Parties in 2008-2009.

As a quick review of her political and influential career, she came from a family with a strong politic tradition. In 1995 Christiana founded the Centre for Sustainable Development of the Americas (CSDA), which is a non-profit think tank for climate change policy and capacity-building, which she directed until 2003. Before that, she served as Director of the Technical Secretariat, Renewable Energy in the Americas (REIA).

As remarked by the TIME Magazine in the edition of September 2010, Figueres has a long history in climate negotiations. Despite her most known climate discussion influences, she began her life of public service at the Embassy of Costa Rica in Germany in 1982. She also served as the Director of International Cooperation in the Ministry of Planning in her native country, Costa Rica (1987-1988), and was also Chief of Staff to the Minister of Agriculture (1988-1990).

Her public and political career has been very recognized by different important institutions and entities worldwide. This year she was among the honorees of the TIME 100 Gala. This is an annual list of the 100 most influential people in the American world, and it is assembled by the American news magazine, TIME.

The nomination of Figueres as candidate for this important post in the UN represents another great advance for Costa Rica in terms of worldwide representation. She is the 12th candidate to the Secretary and know, to compete with them, she will have to forge alliances with diplomats from the major powers of the world, promote an agenda around the objectives of the new millennium and achieve regional consensus.

According to the Foreign Ministry of the Republic, there are two important dates on the agenda to the General Secretariat. The first was this 14 July, when the appearance of Figueres in front of the General Assembly was held, and the other one will be on July 21, when the 15-member of the Security Council will make a sort of "filter" that will select several candidates and denote the leaderships of them.

"Being nominated for my country as a candidate for secretary general of the UN is a great honor and a great responsibility. Costa Rica is a small but with a proud history country, and I thank the President and Government of my country for this nomination" Figueres said.