Activities in Costa Rica: a weekend full of Surfing 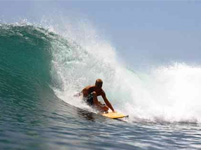 The Reef Centroamérica Surfing Games Costa Rica 2011 began this weekend in Hermosa Beach, one of the most beautiful tourist attractions of Costa Rica’s Pacific coast and one of the favorite destinations included in many of the Costa Rica Travel packages, for its natural beauty and tropical climate.

Hermosa Beach is an ideal place for events like this, thanks to its weather and high waves, necessary for the competition and because it has some of the best and comfortable hotels and resorts in Costa Rica, which makes it one of the favorite places for Costa Rica tourism and big competitions.

On the other hand, the Panamanian Gary Saavedra, 13 times champion of his country is one of the most important surfers of the event. Together with him are the nine time champion Sonia "Pucha" Garcia and Samantha Alonso, present champion of Panama.

Nicaragua is being represented by the current Central American Champions in Open and Longboard, Rex Calderon and Jose Espinoza and Guatemala has excellent surfers as Cristian Ruiz and Gefran Lima, two of its best exponents.

Finally, the Costa Rica national team is formed by the better surfers of the country such as Luis Vindas, Anthony Fillingim, Carlos Munoz and Jair Perez, Lisbeth Vindas, Nataly Bernold and Leilani McGonagle, among others.

All delegations are hosted at the Morgan’s Cove, one of the most beautiful and comfortable beach hotels in Costa Rica´s Pacific coast.
Shared: